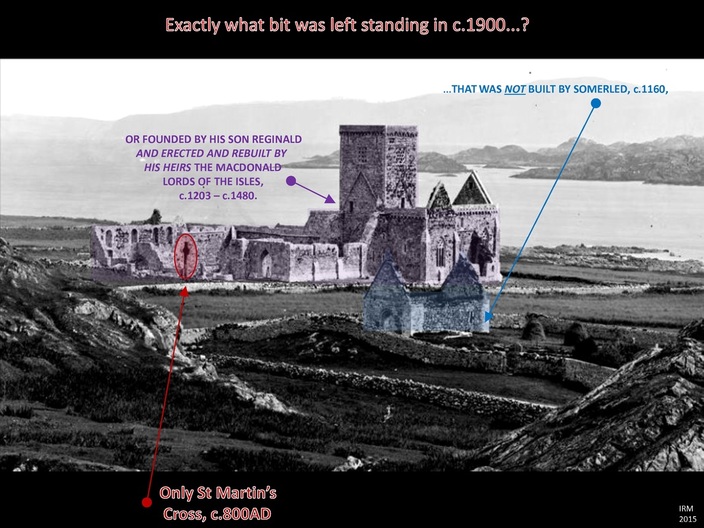 ﻿﻿WHY IT IS NECESSARY TO CORRECT THE  CURRENT MISUNDERSTANDINGS  AND SHIFT  THE EMPHASIS  FOR AN ACCURATE  HISTORICAL INTERPRETATION?

Dr. Iain MacDonald, Glasgow University; 2013 :-  "The Highlander has never enjoyed a good press, and has been usually characterised as peripheral and barbaric in comparison to his Lowland neighbour, more inclined to fighting than serving God.  In "Clerics and Clansmen - The Diocese of Argyll between the Twelfth and Sixteenth Centuries"; 2013, Dr. Iain MacDonald, Glasgow University, examines how the medieval Church in Gaelic Scotland, often regarded as isolated and irrelevant, continued to function in the face of poverty, periodic warfare, and the formidable powers of the clan chiefs. Focusing upon the diocese of Argyll, the study analyses the life of the bishopric, before broadening to consider the parochial clergy – in particular origins, celibacy, education, and pastoral care. Far from being superficial, it reveals a Church deeply embedded within its host society while remaining plugged into the mainstream of Latin Christendom." ﻿
﻿

There is a flawed historical account of the Clan Donald's essential structural role in the medieval abbey's existence right from its inception in 1200, caused by the 300 year later destruction of not only the Abbey's infrastructure but the whole institutionalised national machinery which sustained it. This sudden, violent end of the era resulted in a partial ecclesiastical "memory loss". The Earls of Argyll at that time were Scotland's political masters, the instigators and benefactors of the tumultuous upheavals with massive shifts in the macroeconomic environment. Their descendant Earls and Dukes have not only enjoyed the "fruits" but also the resulting "Reformation" of the Abbey's history in their favour.

As Historic Scotland say :  "In the later medieval period, control by one of the most prominent forces in Scottish politics, the Lord of the Isles is likely to have had a strong impact on the island and its monuments but the role of the Lordship on the architectural, ecclesiastical and political landscape of Iona is poorly understood." (p.10).

The most recent significant public "memory" of the 8th Duke of Argyll's "vision (restoration) as you see it today" and “gifting” of the island is factually wrong and this, plus his omnipresent monument in the Abbey church, throws a long, slanted shadow back over the whole history of the medieval abbey. This politically compromised 19th century short term public memory has blocked out the true, long term history/memory of the 13th to 15th centuries - ie, the Clan Donald's legacy, 1200-1500.

{NB :  At issue here are two Argyll Earls (5th,  8th) in the main and their legacy.   And it need hardly be said, that their later Dukes and Clan Campbell as a  whole should not be burdened by their actions and that many Campbells have made significant, valuable contributions towards Iona’s rebirth from the mid  19thcentury and continue to do so  today.}

When it comes to who is most associated with “Iona Abbey”, the lion’s share of attention is focused on the internationally famous, iconic St Columba, the early Christian era and Iona’s Hiberno-Scottish mission.

Then it fast-forwards to the recency of the regional celebrity of the “extraordinary” Renaissance Man, the 8th Duke of Argyll with the large marble effigies of himself and 3rd wife Ina, so dominant in the cathedral (the "extraordinary polymath, Liberal statesman, philosopher and theologian").

[Was there a 800th anniversary celebration of Reginald's foundation of Iona's medieval abbey in 2003?   No.  But there is a 1450th anniversary in 2013 of St Columba’s departure from Ireland in 563 AD. And amazingly, in the Scotsman, July 2013 :- "Culture secretary Fiona Hyslop and the president of Ireland, Michael D Higgins, attended a special service held at Iona Abbey, built by St Columba in the sixth century [!] following his voyage from Ireland to the Inner Hebrides."  This is a good example of the huge problem that Clan Donald is up against!]

This leaves the Clan Donald Lords of the Isles forfeit of any due recognition, outside of the minimalist role of being called mere benefactors or patrons.  This is a gross understatement of their fundamental contribution to this infrastructure, the resulting macroeconomics of the region and the truly EXTRAORDINARY three centuries long existence of the late medieval Iona Abbey and its Cathedral of the Isles - under the one family. In many respects, they are sidelined, what's more anonymously, to St Oran’s Chapel.

It is all substantively misleading in terms of a proper  interpretation of the history of the site’s extant architecture.
A  misplaced trust in treating with England started the great Royal Clan Donald's  downfall. Divisions within its leadership resulted and the weakened Lordship of  the Isles lost it all, 1493. Including its ecclesiastical history which was also  “Reformed" and the much transformed country forgot that Clan Donald was the  whole reason for the very existence of the medieval Iona Abbey and its Cathedral  of the Isles.


The CLAN DONALD LORDS OF THE ISLES’ central role in the very being and continued existence of the Abbey and Cathedral has been written out of the story. One narrative that helped demolish Clan Donald’s position is probably the most ubiquitous misconstruction of the arrangements for medieval ecclesiastical  infrastructure and financing:- "The monks built the  Abbey!”

Now is the time  and opportunity to remedy the century old popular myth that:-

“Iona Abbey, as you see it today, is largely due to the vision of the 8th Duke of Argyll”.

A major problem with the how this site is currently interpreted is a perception that none of it, or very little, has anything to do with Clan Donald. [slide presentation]

This is only caused in part by the collapse of the MacDonald Lordship of the Isles  and time (and lack of understanding of monastery tenure, economics) but is now  principally re-enforced by the location, visibility and one sided attribution of  monuments.

NB:- It is appreciated that Historic Scotland, only assuming control in 2000,  want to remedy this but to do so in a holistic approach - hence the 2012 "re-interpretation" plan.

There  is a glaring interpretative disjunct, even when not intentional, of:-  The named monuments of the  8th Duke of Argyll and wife, large and gleaming white Carrara,  prominently occupy the whole south transept of the main building, the Abbey  Church (St Mary’s – as rebuilt by the last Lord of the Isles, John (II)  MacDonald, late 15th c.).

That is, they dominate, and give a false  impression of their integral relevance and of the contribution of the 8th Duke and his dynasty to the Abbey and Cathedral's existence and restoration.

[If  this assessment is considered as only Clan Donald crying over spilt altar wine, then an appropriate response is :- where does accuracy and honest attribution stand in historical interpretation?  Its a common ploy to accuse others of splitting hairs when its not oneself  who had to take the hair cut.]

Its somewhat of a pity and not my preferred manner (practice) that I feel, rightly or wrongly, a “loud call” has to be made to turn  around the entrenched misconceptions or misplaced interpretations and emphases  of long duration. Unfortunately, this is a case where the misunderstandings must be emphatically pointed out to even bring the correct history into people’s consciousness, and then painstakingly proven, to make any real difference and  change to happen (and it is painful).

There should not be even a subliminal continuation of the clouding of the facts which :-

(A)       gives  none or very little credit to the early Clan Donald and their immediate antecedent for the very existence and continued growth, enhancement and  maintenance of the medieval Abbey for three centuries;

(B)       portrays little of the responsibility for the then Earls of Argyll
playing a significant, leading part in its 16th and 17th centuries asset stripping and physical destruction and exactly how the abbey’s wealth and property “came  into the hands of” their family;

(C)      however sees the Argyll Earls/Dukes (and consequently Clan Campbell) enjoying a disproportionate amount of the accolades for “returning” and “restoring” the  Abbey, when very little of it all or the exact opposite is the truth.

OTHER OPINIONS AND PERSPECTIVES.

[A]  McDonald, R.  Andrew.   “Although scholars have noted the religious  foundations of the Anglo-Normans as well as the MacMalcolms in Scotland, they  have tended to overlook the role played by Gaelic and Scoto-Norse kings,  princes, and aristocrats in bringing the reformed monastic orders to their  lands.

Indeed, the contribution of the native elements of  Scotland in this respect remains  an almost unwritten Chapter in the ecclesiastical history of Scotland.”  [1]

[B]   Dr. Geoffrey Keating, 1861 [2].   An extract:- "Thus the above-mentioned authors proceed when they write of this kingdom: what was worthy or commendable in the Irish nobility and gentry, they pass over. They take no notice of their piety, learning, and courage, of their charitable disposition to build churches and religious houses, or of the great privileges and endowments they conferred and settled upon them."

[NB: This is little different to what has happened to much of the history of  the Western Highlands and Islands of Scotland.  As relayed to me recently by an eminent academic in Scotland :-  "The Lordship and its culture have been poorly served by historians in Scotland [as acknowledged by Historic Scotland above], also the history of Gaelic Scotland generally."  A quite separate Dr. of History relayed to me that this is one backdrop to the recurring attempts by some for the politicised  "dehibernisation of the history of the Western Isles".

[C]  - Dr. Iain MacDonald, Glasgow University; 2013.
"Clerics and Clansmen"  as at the top. "INTRODUCTION.  This is the first dedicated study of its kind for Scotland Scholarship in this arena is sorely wanting, as detailed analyses of the medieval Scottish Church especially in the later Middle Ages are few and far between. The Scottish Reformation in 1560 and the controversies surrounding Church government proved more fertile ground for ecclesiastical historians of the nineteenth and early twentieth centuries, in part because the voluminous surviving material dwarfed that for the medieval period but also because of the predilections of Scots historians to study the ecclesiastical history of their own Presbyterian or Episcopalian persuasion. Those scholars who delved into the medieval past tended to ignore the post twelfth-century Church, regarding it as an age of ‘spiritual darkness' after it had been reorganised along continental lines by the Anglo-Normans and had fallen under the yoke of papal tyranny. They preferred instead to focus on the Church before AD 1000 usually in vain attempts to find precedent for the expression of their own brand of the Christian faith, or to discover the elusive mystical Celtic Christianity' among the aboriginal peoples who inhabited Europe’s outermost fringes, untouched and uncorrupted by Roman civilisation."

[1] “Of the many Scottish cartularies that survive,  only three pertain to native foundations, and not one is extant for the  foundations of the Lords of Galloway or for those religious houses in the west  highlands and islands like Iona, Saddell, or Ardchattan.”