Somerled built and was buried, 1164, in his new, mid 12th c. mausoleum, Teampeall  Odhrain, ie, St  Oran’s Chapel. Historic Scotland date the chapel as c.1150 matching  Somerled’s conquest of the Isles. Reginald was only born in c.1153 (died age  54 – G. Buchanan) therefore he could not have built it.   It was originally a pre-Columban dry-stone oratory built over St Oran’s  grave with the altar over his tomb or translated relics as was the practice (then, only maybe, Queen (St)  Margaret’s small effort c.1073).  These events are confirmed by both the architectural archaeology and the history. (RCAHMS 1977, 1982; RA McDonald – “Death & Burial of Somerled”).

He was RI INNSE-GALL(King of The Isles) and would demand nothing less than to be buried with the 40 (at least) other  Gaelic/Celtic/Norse Kings (or ‘sub-kings’) of Ireland, Scotland and ‘Norway’ in  Reilig Odhrain, the most ancient graveyard in all Scotland  - in a “Celtic Church” cemetery.  And buried right next to the relics of a revered saint (Oran) whose earthly  remains were forever in direct contact with his soul in heaven! St Oran  was first on Iona, dieing there in 548 of the plague, 15 years before Colum  Cille even arrived. [1]  W. Reeves even says “St Columba’s bones should be sought for in the Reilig Odhrain”! [2] 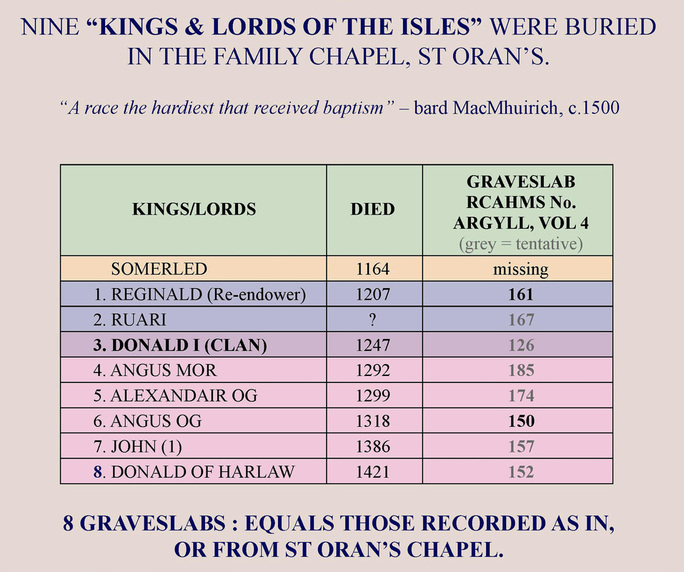 The cult of saints, body part relics, the doctrines of purgatory and intercessory prayer were to profoundly shape their lives, institutions and burial rites.

"depositio ad sanctos"; “Relics were the Saints, continuing to live among men;” "The dead are not actually dead .”

“The Saints could act and feel like the living, and were treated as if they were alive and incorrupt.”

“The soul in heaven remains in contact with the earthly body, which shall renew itself at the Resurrection, but which is already filled with a heavenly dynammis-virtrus, with a manna-like power. It was a miraculous double existence” (“Treasures of Heaven”; 2011; pps  19-26).

Ancestral graves remain the constant centre of life – the sacred storehouse  -  a  “mode of sepulture, according to the tradition of the country.”