DID GEORGE, 8TH DUKE OF ARGYLL, HAVE A "LOVE COLUMBA, HATE POPE" RELATIONSHIP WITH IONA?

THE EARLS/DUKES ARGYLL & IONA
Additional context, aspects  - See "Epilogue".
Further relevant content - See "Introduction"
WHAT OTHERS SAY ABOUT THE 8th DUKE  AND IONA   :-
WHAT MOST ACCURATELY  REFLECTS GEORGE'S ATTITUDE ?    THE ABOVE, OR THE BELOW? {CLICK FOR SLIDE PRESENTATION}

The 8th Duke was proud of ‘owning’ Iona not because of the medieval Abbey, but because of his love for the island’s nature and particularly its association with one man, St Columba. He  gives the distinct impression that he would have been quite satisfied if the medieval abbey had never existed.  NB: The established Church of Scotland (orientation Calvinist) traces its origins beyond the Reformation and sees itself in continuity with the church established by St. Ninian, St. Columba, St. Kentigern and other Celtic saints. To the 8th Duke, the Catholic-Benedictine-Clan Donald phase of 1200-1500 is just an inconvenient interlude between the Paruchia Colum Cille and the Protestant Reformation.  To him, the three century long period  inconveniently interferes with the "continuity" just mentioned and is something best denigrated and relegated to unworthiness and insignificance.

In 1899, just before his death, the Duke transferred (returned*) ‘ownership’ to the Iona Cathedral Trust (linked to the Church of Scotland).  This “was not accompanied by any endowment and funds had to be raised by the Trust.” The abbey church was substantially rebuilt and restored by the Iona Cathedral Trust (by Public Subscriptions for Abbey Church 1901) from 1902-1910. This fund raising was vigorously led by the Rev. Donald MacLeod, former minister of St Columba’s Church, London.

George had a negativity towards the existing medieval abbey and particularly what he regarded it had, and for some 400 years, still stood for – ‘the corrupt monotony of medieval Romanism’ (and of its inherent “Hebridean MacDonaldism”?) He is wholly entitled to this opinion, but equally, and as a corollary that influenced his relatively minor and repeatedly enforced action on the Abbey, he should not have plaudits heaped on him (by others) as its principal saviour, especially at the expense of the real instigators of Gregory, Skene, Drummond, Bishop Ewing, his wife Ina, then Sir David Russell, Sir James Lithgow, the Rev. Dr. Donald McLeod, the general public’s generosity and the Rev. George McLeod’s truly ecumenical Iona Community (with their pure selflessness; sheer back breaking work). This is not a criticism of the 8th Duke. Its a statement on other’s ‘hagiographic gloss’ on him; and their thinness of cause and affect.

* [Coda: Its very possible that the 9, 10, 11th Dukes of Argyll (who were not attached in any meaningful way with Iona Abbey) were somewhat uncomfortable at do-gooders trying to pin a rather inflated St John (Ambulance) Cross on them, when all that happened with the 8th Duke was that he was obligated, under pressure, to stabilise the victim, who was bashed and robbed by an extremely youthful Argyll Earl with a later accomplice (two past ancestors), and he duly had good bandages and splints applied (and allowed an any-brand minister to attend). After being harangued again, he returned the  “received goods,” still badly damaged and without due reparation from the liable dynasty’s coffers. If I am judged to be too  harsh, please read the Anglican, “middle way” History Of St Andrews, etc; VOL I ; pps 330;  331 -343.[1] ]
http://www.archive.org/details/historyofstandre01lyon

[1] For example : “At St Andrews, Knox met by appointment with the Prior of the Augustinian monastery, the well known Lord James Stewart, and with Archibald the fifth Earl of Argyll. But I must pause here a moment to make a few remarks on these the two most influential of the lay Reformer's of Scotland, the first of whom was, at this time,  only twenty-six years old, and the latter no more than eighteen ; both, it must be confessed, far too young and inexperienced, and as the event proved, too greedy ….. to conduct so momentous a work as the Reformation of the Christian Church”.   NOTE : this 1843 book is addressed to the Reformed Catholic Church in Scotland (ie, Anglican: ecclesia Anglicana, 1246 ; non Papal; “middle way”; "Protestant Episcopal Church") - by Rev. CJ Lyon, MA. “formerly of Trinity College, Cambridge, and now Presbyter of the Episcopal Church, St Andrews”. 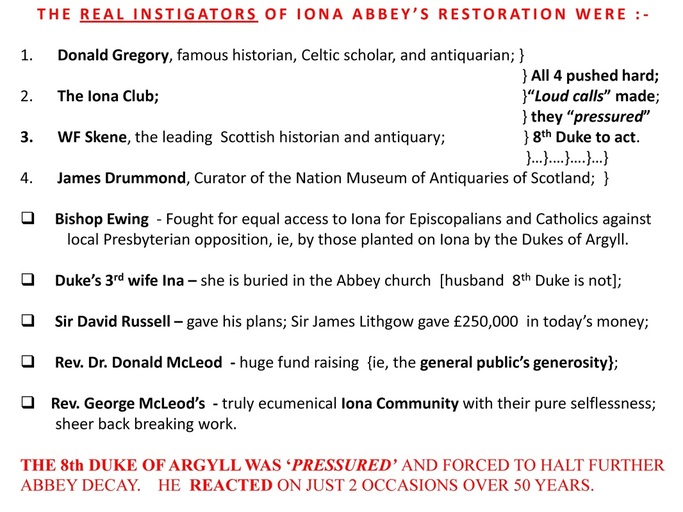