“The dead are not actually dead. ”

“Relics were the Saints, continuing to live among men.”  [1.]

“The Saints could act and feel like the living, and were treated as if they were alive and incorrupt.”  [2.]

“The soul in heaven remains in contact with the earthly body, which shall renew itself at the Resurrection, but which is already filled with a heavenly dynammis-virtrus, with a manna-like power. It was a miraculous double existence.” (“Treasures of Heaven”; 2011; pps  19-26.)

My précised interpretation by arranging some poignant short descriptive quotes-words reflecting the period :-

Ancestral graves remain the constant centre of life – the sacred storehouse. At each new burial, imperishable live skeletons, with second souls, are relocated unscathed to await alone for their undisturbed and unhindered heavenly re-animation at the resurrection – day of judgement.  In this process, the Clan Donald ancestral line of descent of the very first man (Donald I) is preserved, made constant and connected by the absorbed  power of the spiritual burial dust and bits of stone, with their accumulating life-force mingling with the ‘alive’ St Oran  - the dynamis-virtrus of this altar’s requisite and indispensable saintly relics of St Oran’s bones and his second soul which is in constant contact with his Holy Soul in Heaven next to God   (the skull/head was the most significant in this thinking.) 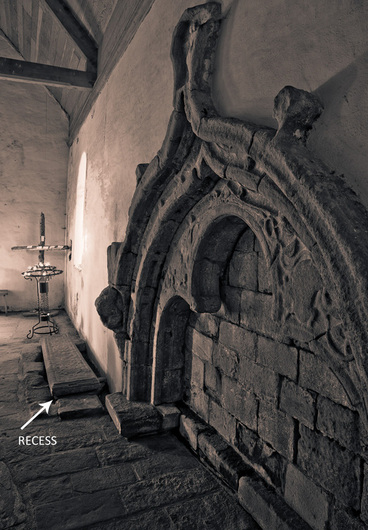 FLOOR RECESS  (slab 185 shown covering it now).  It is just east of the arched wall niche where six successive Clan Donald Lords of The Isles are buried in front. Its most probably a place for a table/platform, bier or catafalque, against the south wall with the head (its wider end reversed) towards the altar, to place the body “in state” and readiness before burial. {to contain and drain  the usual body fluids over the 8 day waking period}.  “Between the preparation of the body and the burial, the body lay in church on a bier and there was continual recitation of psalmody until burial…”. (Death and burial in medieval England, 1066-1550; Daniell, Christopher; 1997; p.31.)

Its also near the south window for obvious practical reasons! It was practise for many centuries (recorded through to the 17th c.) that candles were put on a frame, or even a table for the poorer, above the corpse.

(Picture above has link to my plan of St Oran's chapel floor showing original positions of each buried King/Lord of Isles  - not the new positions of the secondary burials {except Donald I's}, with their bones and individual graveslabs relocated from the south wall, arched wall niche ancestral tomb.)

The draped coffin is enclosed within a frame like hearse, which is covered by candles symbolising the upward ascent of the offered prayers. The warmer air would also lift the air around the corpse above head height and create a flow away from it - to the nearby south window.

When the body is picked up from this position by the son and heir and he turns around to present to the assembled nobles, the dead Lord’s head is at the correct west end of the grave and church for the ceremonial burial. For each new elite Clan Donald burial (ie, from  Donald I), the previous graveslab over the “tomb of ancestors” would be first uplifted during the 8 day waking, psalm singing and laying in state and readied for relocation within the chapel..

[Painting below : A requiem mass in a collegiate church. ‘A prime function of such churches was the offering of prayers for the souls of their founders, and in this view the service which followed the founders death is depicted. The coffin is placed in the main body of the choir, to either side of which are the stalls of the canons, whilst the altar and its reredos are covered by the same cloth as is used for the coffin pall’. (Paris, Musée Jacquemart- Andre’ MS 2f 142v).]

Then, following “the mode of sepulture, according to the tradition of the country”  the son burying his father would first reverently remove the (prior) revealed skeleton intact from the shallow grave to the newly prepared spot in the chapel : “the bones found in the stone coffin, when a fresh interment is made, are carefully removed, and, afterwards placed in a wooden coffin [only latterly?], wherein the recent body was brought to the graveyard, are buried near the stone sepulchre”.

Before raising the body of his father, without aid (from the ‘catafalque’) : “It was considered the duty of the heir of the latterly deceased person, after having cleared out the tomb by removing the bones, to raise the body of his relative, and, without any aid from others, [thus a shallow depth] to deposit it in its temporary resting-place” – and turning to face the assembly :

“His full  noble body was buried with befitting pomp and solemnity in the tomb of his ancestors on the south side of Teampull Odhran; the sacred storehouse of his predecessors and guardian of their bones.”       (see chapter  8 below for full details) 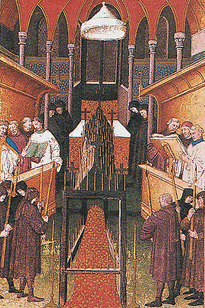 Download File
NB :   CORRIGENDUM  to this Chapter {link}.  It is to provide the correct situation that graveslab No. 161 is not still on the north or Gospel side of the altar in St Oran’s Chapel. However, Historic Scotland now agree with my research that this honoured position is, by ritual and custom, most likely where Reginald, the Abbey founder, is buried - and,  with his father, Somerled, on the other side.  See their just released, 2014 Official Guide to Iona Abbey, p.39. And its p.17 {and Credits} also acknowledge my essential “reinterpretation of the inscription” on slab no. 150 which identifies it as Angus Og Macdonald’s, died, c.1318;  see  the detail in Ch. 6, of the book, or ANGUS OG on the left hand list here.   {Letter to me from Historic Scotland.} 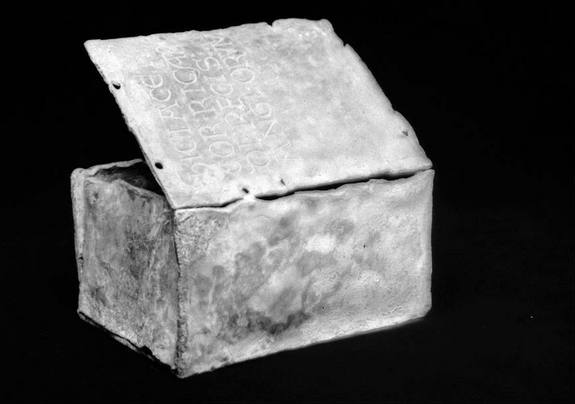 French scientists have just analysed the organ, kept at Rouen Cathedral since the death of Richard I, known as The Lionheart.  He died in 1199 at 41 while fighting the French in Chalus, central France.

The heart — an organ then believed to be the site of the soul — was buried in the cathedral at Rouen in Normandy, then an English possession.

On July 31 1838, Rouen historian Achille Deville made an astonishing discovery.

During an excavation of the cathedral, a lead box about the size of a large book tumbled into the crypt. Medieval embalmers used mercury and tar-like creosote to preserve the heart, then applied frankincense, myrtle, daisy and mint to it so that it would smell sweet, his team found.

We know from historical sources that those herbs and spices were used to make the time Richard the Lionheart would spend in purgatory shorter by giving him a kind of odour of sanctity.

The organ was then wrapped in linen and sealed for eternity inside the lead box.

Twelfth-century embalmers were usually cooks and butchers, who were used to cutting meat and removing offal and had access to herbs, spices and other aromatic substances.

But — contrary to a popular image of the Middle Ages as being barbarous — the individual or individuals who worked on Richard’s heart “were extremely skilled,” combining complex metals, including liquid mercury, with vegetable residues.