1549 : “This sanctuary was wont to be the sepelture of the best men of the Isles, and also of our Kings, as we have said;
because it was the most honorable and ancient place that was in Scotland in those days, as we read”.
[ "Description of the Occidental, ie, Western Isles of Scotland";  Donald Monro; 1549.]


“This was the grand cemetery of Iona,
the cherished and far-famed spot whither,
for ages, funeral parties voyaged
from a distance to inter the illustrious dead.” 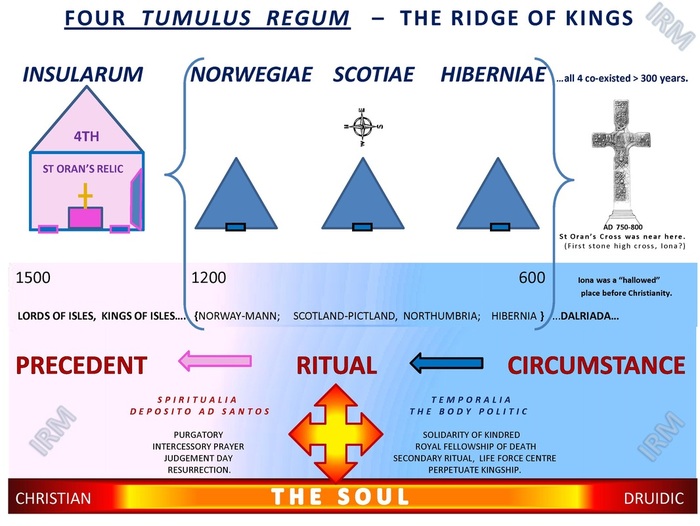 Above :     Somerled built and was buried, 1164, in his new, mid 12th C.  mausoleum, Reilig Odhrain, ie, St Oran’s Chapel. Historic Scotland date the chapel as c.1150 matching Somerled’s conquest of the  Isles. Reginald was only born c.1153 (died age 54 – G. Buchanan) therefore he could not have built it.  As RI INNSE-GALL (King of The Isles) Somerled would demand nothing less than to be buried with the 40 (at least) other Gaelic/Celtic/Pict/Norse Kings (or ‘sub-kings’) of Ireland, Scotland and ‘Norway’ in Reilig Odhrain, the most ancient graveyard in all Scotland  -“The Royal Fellowship of Death” .

“REPORT OF  20 WRITERS IN ICOLLUMKILL”:- “With regal pomp and ceremony the body of the King of the Isles was buried ……in Iona’s piles, where rest from mortal toil the mighty of the Isles." (Hugh of Sleat,  c.1650). “A sepulchre on Iona was Somerled’s final right.”  “His body was taken to Iona; his place of sepulture was the ancient ecclesiastical capital of his island domains.” [ The Death and Burial of Somerled of Argyll, West Highland Notes and Queries, ser. 2, no.8, Nov.1991, p.6-10. McDonald, Russell  Andrew.]

This photo  (above) probably by  the Iona Club just after finishing the re-arrangement of slabs in the cemetery  (c.1858) and in St Oran’s Chapel and then gating it shut (c.1860- see the thin  iron pickets).  It is not a good  quality image (even enhanced) but a very good one to add text and graphics to  which clearly show the historical context (The chapel restored and re-roofed a  century later in 1957 by the Iona Community).

Download File
"Isle of sleep, where dreams are holy,
Sails to thee a King who sleepeth,
With thy Saints we leave him sleeping”.