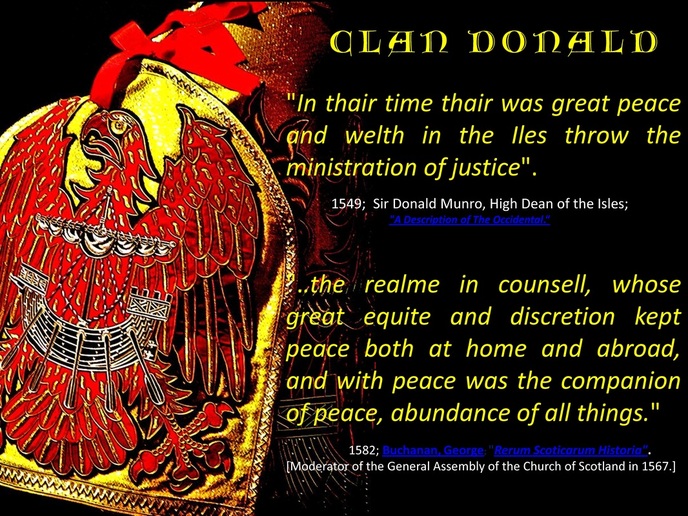 1549;  Sir Donald Munro, High Dean of the Isles;  "A Description of The Occidental.“ 1582; Buchanan, George; "Rerum Scoticarum Historia".[Moderator of the General Assembly of the Church of Scotland in 1567.] 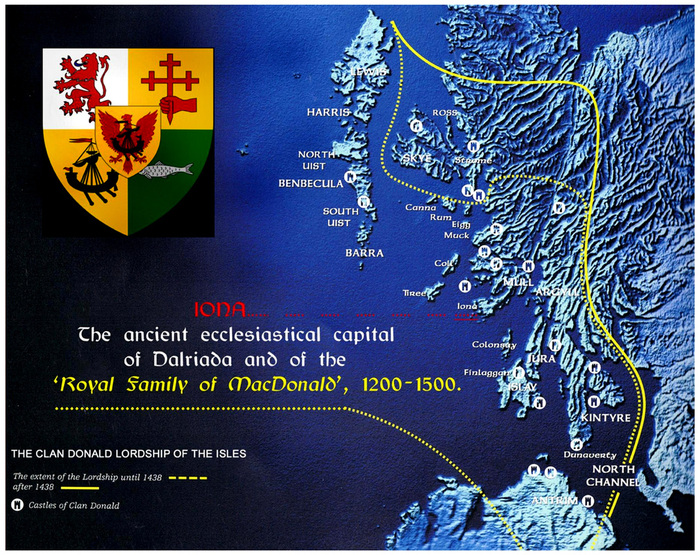 'The island of Iona', off the west coast of Scotland, is the symbolic center of Scottish Christianity. Through 1400 years of history its fortunes have fluctuated, from its heights as one of the greatest centers of learning in Dark Age Europe, to its lows as a crumbling ruin.  Many of the kings of Scotland, Ireland, and even of the Vikings, were buried there. Some of the most famous Kings of Alba, from Kenneth MacAlpin to MacBeth, made their final journey there - across the sound to Iona, onto the harbour, and up the Street of the Dead to the burial ground, the Relig Oran. [BBC].


KING REGINALD (d. 1207) AND HIS IMMEDIATE HEIRS THE CLAN DONALD LORDS OF THE ISLES, WERE THE PRINCIPAL FINANCIERS AND BUILDERS OF IONA ABBEY AND NUNNERY. [save/open slide presentation]

"The patron has the subsidiary duty of building" (Trent, Sess. XXI, "de ref.", c. vii).   ius patronatus - ipso jure  :   “A right of patronage comes into existence or is originally acquired by foundation, privilege, or prescription. Under foundation or fundatio in the broader sense is included the granting of the necessary means for the erection and maintenance of a benefice."

"Thus, granting that a church is necessary to a benefice, three things are requisite:

(fundatio in the narrow  sense);

[WHAT IS A PATRON?  I think we have a really big problem with today’s understanding of “patron”. It is a term dramatically altered from ecclesiastical medieval times and today has a multitude of different, lesser meanings. I’ve done some sampling, and if 100 ordinary Iona visitors were asked what is the patron of an abbey, I would wager that 75-90 would say one of these {from Oxford Dictionary meanings} :- a distinguished person invited to hold an office of honour there so that it might benefit from his/her position, influence; a person who gives support, money, custom {stone monuments}, protection; can appoint to offices; advocate, defender; even a person who frequents there; a patron saint.

Even most church literate people would only think it means : “holder of a right of presentation to an ecclesiastical benefice”.   The majority do not know the full medieval meaning includes, eg, “the granting of the necessary means for the erection and maintenance of a benefice; the erection of the church at one's private expense (aedificatio).”

Kings were the principal Abbey builders, not Abbots; they are the King’s Master Masons or Church-Wrights, not the Abbotts.  It is such a difficult task to overcome the most ubiquitous misconstruction of the economic arrangements for medieval ecclesiastical infrastructure and financing:- ie, "The monks built the Abbey!”
[The medieval mason was not a monk but a highly skilled lay craftsman who combined the roles of architect, builder, craftsman, designer and engineer."  BBC;  Feb 2011. ]

But why is it such a problematic concept to grasp, or accept, for the western isles when the paradigm is pris pour acquis in the rest of Scotland?   A few equivalent examples of many are :-

1.    "King Edgar of Scotland had granted the land of Coldingham to the Church of Durham in
1098, and a church was constructed by him and presented in 1100.

2.     (St) Margaret, mother of David I, was provided with a group of Benedictine monks by the
Archbishop of Canterbury “for the church she built at Dunfermline.”  "It was King David I
​          who rebuilt the Abbey as a much larger and more magnificent structure."

3.     "Building of the (Holyrood) Abbey Church began shortly after its foundation in 1128
by David I  for the Augustinian Canons”.

A partial explanation is  :-  [A] "Indeed, the contribution of the native elements of  Scotland in this respect remains an almost unwritten Chapter in the ecclesiastical history of Scotland” (MacDonald RA; 1995. "Scoto-Norse Kings and the Reformed Religious Orders");    and..
[B]   Dr. Geoffrey Keating's Preface, 1861 .   An extract:- "What was worthy or commendable in the Irish [read Gaelic] nobility and gentry, they pass over. They take no notice of their piety, learning, and courage, of their charitable disposition to build churches and religious houses, or of the great privileges and endowments they conferred and settled upon them."   [NB: This is little different to what has happened to much of the history of  the Western Highlands and Islands of Scotland.]

TO ONLY SAY THAT REGINALD FOUNDED IONA ABBEY AND THE LORDS OF THE ISLES (UNNAMED) WERE GENEROUS BENEFACTORS THROUGHOUT OR PATRONS IS AS COMPLETELY INADEQUATE AND INSUFFICIENT AS SAYING THAT THE BENEDICTINE MONASTERY, NOW "WEST MINSTER ABBEY", WAS FOUNDED BY THE "BOY KING" EDGAR, c.960,  AND THAT KING EDWARD THE CONFESSOR, 11TH CENTURY, AND HENRY III, 13TH CENTURY  WERE JUST GENEROUS BENEFACTORS OR PATRONS.

THIS WOULD NEVER BE TOLERATED BY ANYONE, BECAUSE IN FACT THEY EACH FINANCED AND REBUILT 'WEST MINSTER' ON A MUCH GRANDER SCALE, STYLE AND ENHANCED STANDARD  - TWO CENTURIES APART.  HENRY III REBUILT ALMOST THE ENTIRE ABBEY COSTING HIM MORE THAN £41,000 - THE 2ND MOST EXPENSIVE BUILDING PROJECT IN MEDIEVAL ENGLAND. [1]   THE OFFERINGS OF PILGRIMS TO THE MOST FABULOUS GOLD PLATED AND JEWEL ENCRUSTED SHRINE OF ST EDWARD THE CONFESSOR (OR FOR INDULGENCES) DID NOT FUND THIS REBUILDING!

EQUALLY, A SIMILAR INADEQUATE, FAR FROM COMPREHENSIVE INTERPRETATION (ALBEIT SMALLER SCALE) SHOULD NOT BE TOLERATED CONCERNING THE FINANCING, SUPERINTENDING AND ORIGINAL CONSTRUCTION OF IONA ABBEY AND THE FINANCING AND BUILDING OF THE 15TH CENTURY CATHEDRAL OF THE ISLES BY THE FOUNDER'S HEIRS, THE CLAN DONALD LORDS OF THE ISLES.