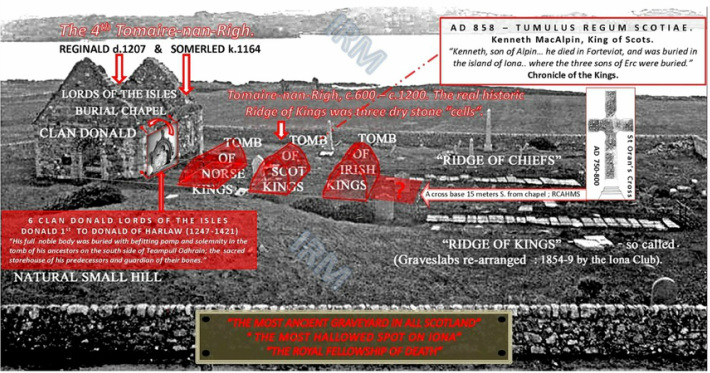 MOST ANCIENT GRAVEYARD IN ALL SCOTLAND - ST ORANS CEMETERY.

The early 7th century Irish Scotti, Dalriadic Kings were also buried there, certainly starting from Aiden in c.609 . Or, was it from "where the  three sons of Erc were buried" as recorded in the Chronicle of Kings?  One each in the three dry stone Tomaire nan Righ which might explain their origin and significance.

Aiden was inaugurated King in 574 in a ordination ceremony by St Columba on Iona and he was buried there (was the Stone of Destiny used as a coronation chair when Columba anointed and crowned Aedán King of Dalriada?).   Columba, as an eligible royal heir of Cenel Conaill (Kings of Aileach, High Kings of Ireland) was accepted and respected by these rulers, not out of close kinship or his obvious strong character and qualities, but because they were vassal-allies of the powerful Northern Ui Neill (which continued for a 1000 years). And he could aid them!

This first known Christian ordination of a King in Britain or Ireland is not surprising as Dalriada was an ‘international’ leader in many aspects of governance and law, eg, :- (A) the 7th century “Senchus fer nAlban” – first known census in Britain (which includes a contingent from Airghialla, Ulster with the dominant Cenel Lorn); (B) the Cáin Adomnáin, “Law of Innocents”, 697 - immunity for non-combatants, the first known treaty for protection of women, children and clergy in war.