STATEMENT :
Alaxandair OG's branch :- "Undoubtedly in the light of  primogeniture they were the senior family of the line of Somerled”. "Were" is the operative word and it is simply so because:- 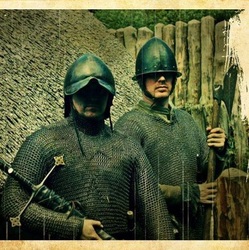 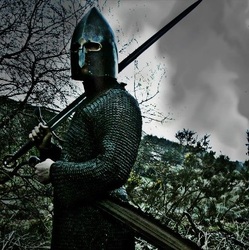 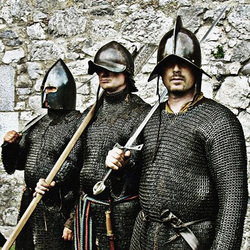 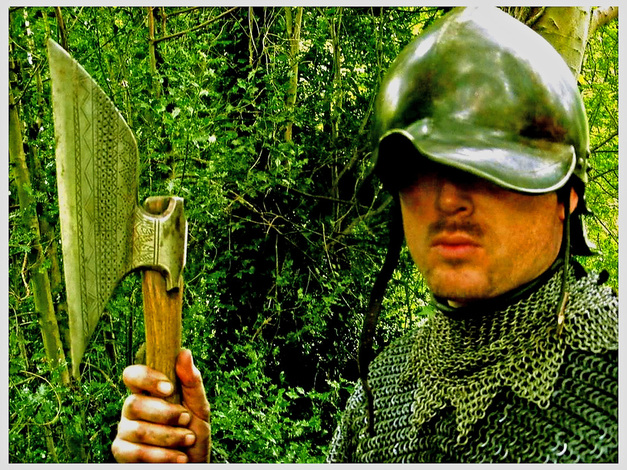 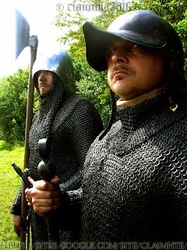 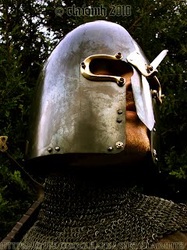 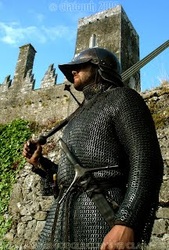 Video :-  Tyrone & Armagh MacDhomnaill Galloglaigh - Heriditary “Ard constapla coicidh Uladh”,  High Constable, of Ulster to "The O'Neill"; c.1300-1600.     See Tullahogue, the O'Neill king's crowning site and some weapons, including :- a 16th Century Axe Head from the Blackwater R., Clonteevy, Tyrone, near Macdonnell territory, as expressed about them, c1600, the “Galloglass under the Blackwater”. They were the only Galloglaigh dynasty in Tyrone and Armagh - and for three centuries. It has been classed (Museum, Belfast) and mentioned, as similar to the axe depicted in the O’Neill inauguration c1600 map - with the Macdonnell Constable, Emann Og, holding it high (UJA, VOL 60: Antiquities from the River Blackwater (III) -Iron Axe Heads; 2001).  It is made from a single folded piece of iron with silver foil decoration of “Celtic” designs. It’s obviously an axe for a high status leader, used as an authority symbol and ceremonially, but also it’s a recognised fighting weapon style. A rare style and quite significantly, mainly only found within miles of the areas that Macdomnaill Galloglaigh owned and occupied – ref. UJA above). The blade is 30cm long  (replica in large photo above and in video).
SUMMARY.

There is little awareness of the historical significance and relevance of the Macdonnell Galloglass - “Second only to the MacDonalds in their importance as galloglaigh were the MacSweenys”[1].  All the main Galloglaigh dynasties were descended from the Norse-Gaelic aristocracy of Argyll and the Isles and yet their story has been called “a forgotten chapter in West Highland history” (Galloglass; Marsden). Most are the seed of Somerled, in particular the Clann Domhnaill.

The Clan Donnell Galloglaigh began the quest to extricate Ireland from Norman invasion from the middle of the 13th century and were the “decisive military component in the Gaelic Irish resurgence and the cutting edge of resistance to Tudor reconquest two centuries later”[2].  It can be worn as a badge of honour that Sir Henry Bagenal in 1592 blamed the Galloglaigh for being “the firebrand and nurse of rebellion”.

The propagandist “view of Ireland as essentially a land of war in which peace occasionally and fitfully breaks out  - is in large measure a [“distorted”] caricature : there was scarcely a society in medieval Europe in which “endemic warfare” was not a feature”. [3]  The truth about Ireland’s customs, culture, society, history in general has suffered great distortion at the impartial hands of the victors over nearly a whole millennium. The English will have you believe they themselves smell like [Tudor] roses – a grand delusion. To give just one example is the thirty-two year War of the Roses (1455-1487). Dr. Geoffrey Keating, 1861, has put it more succinctly and vividly [4]. An extract, minus the "sordid inclination" of the dung beetle :- "Dr Keating's Preface : Thus the above-mentioned authors proceed when they write of this kingdom: what was worthy or commendable in the Irish nobility and gentry, they pass over. They take no notice of their piety, learning, and courage, of their charitable disposition to build churches and religious houses, or of the great privileges and endowments they conferred and settled upon them: they omit to speak of the protection and encouragement they gave to then historiographers, and to other men of learning, to whom their liberality was so abounding, that they not only relieved the indigency of those who made their applications to them, but made public invitations to find an opportunity to bestow gratifications upon persons of merit and desert. They forget to mention their virtues and commendable actions; but, in their accounts of this kingdom, these authors dwell upon the manners of the lower and baser sort of people, relate idle and fabulous stories, invented on purpose to amuse the vulgar and ignorant, and pass overall that might be said with justice, to the honour of the nobility and gentry of this nation."(1861).

[NB: This is no different to what has happened to the history of  the Western Highlands and Islands of Scotland.  As relayed to me recently by an eminent academic in Scotland :-  "The Lordship and its culture have been poorly served by historians in Scotland [acknowledged by Historic Scotland], also the history of Gaelic Scotland generally."  Another Dr. of history relayed to me that this is one backdrop to the recurring attempts by some for the "dehibernisation of the history of the Western Isles".  That all this is certainly not romantic imagination, is evidenced by Clan Chief, Ian Campbell, 12th Duke of Argyll stating on TV (New York Times,  24 Apr 2001.)   :- "He provoked another uproar, this time among Scottish nationalists in 1995, when in a television documentary he pronounced himself ''very satisfied with the result'' of the Battle of Culloden in 1746, when British Redcoats crushed the ''Forty-Five'' Jacobite uprising and drove Bonnie Prince Charlie, the young pretender, into exile. ''The battle,'' the duke said, put an end ''to all this Highland nonsense and dragged the clans into a comparatively modern world",  "ending what he called ''400 years of barbarism.'']

The 'nobilis' Macdonnell (and MacSheehy) Chiefs led their influential military forces in at least three potential overthrows of centuries of English domination.  On one hand, allianced to the gaelicised Anglo-Irish Fitzgeralds, Earls of Kildare (Silken Thomas 1534-35) and of Desmond, Munster (James & Gerald 1569-71, 1579-83) and thirdly to the Gaelic Hugh O’Neill, Earl of Tyrone (1602).  All would–be Kings of Ireland, but none of them emulated The Bruce at Bannockburn.

That, is staying power; that, is determination; that, is justice, and something any country is right to be proud of (more so than even America’s Independence from Britain) and the Macdonnell Galloglaigh with their descendant soldiers, played a historic and often key role in this epic saga for 500 years. 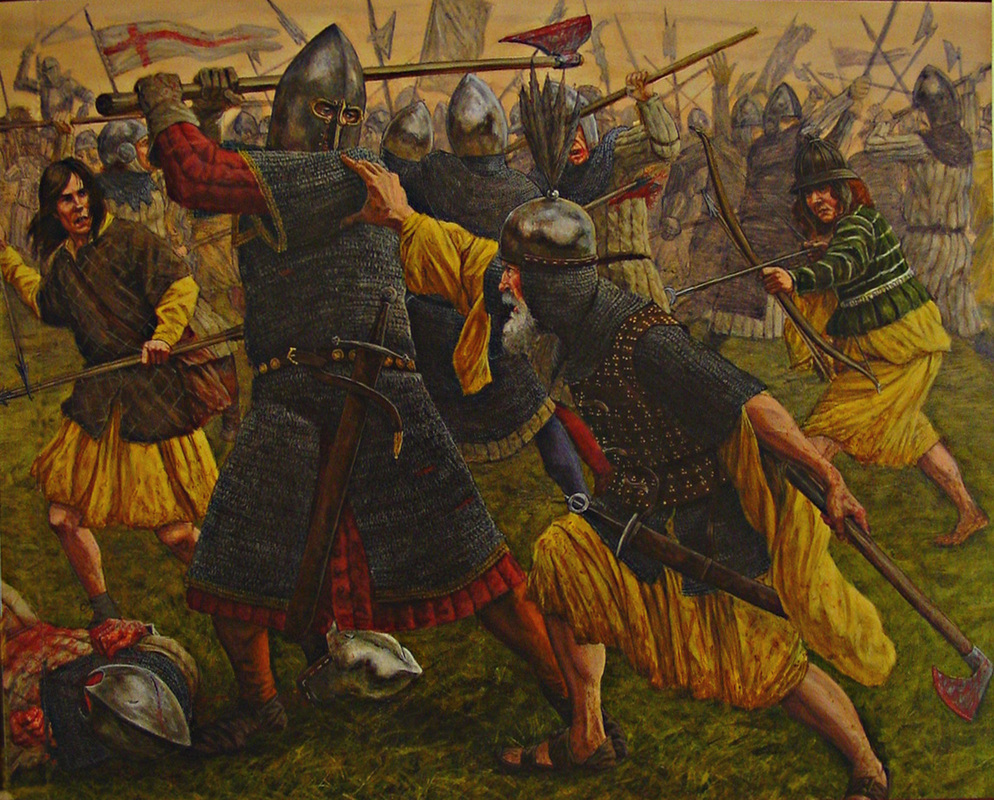 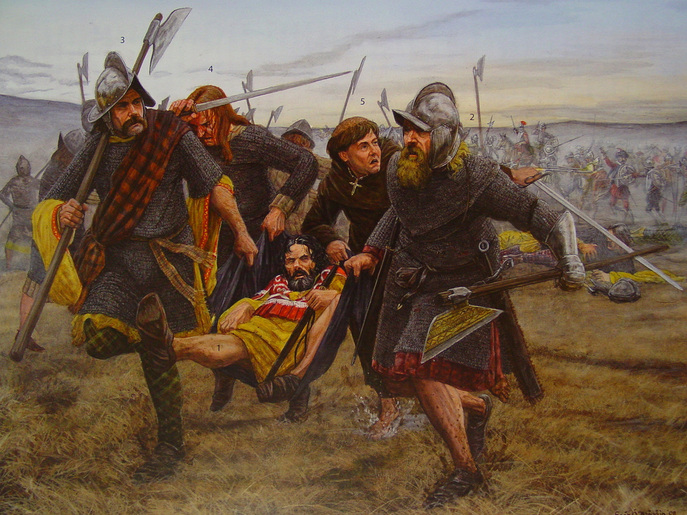